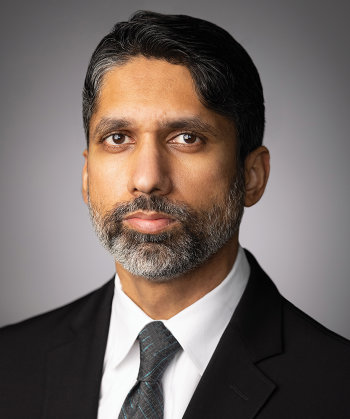 Arvind Jairam is an associate in the Litigation practice of Paul Hastings and is based in the firm's Washington, D.C. office. His practice is focused on patent litigation, including patentability trials at the U.S. Patent and Trademark Office (USPTO) and patent infringement cases in district courts. Clients benefit from the breadth and depth of his experiences in technology, business, and law.

Mr. Jairam has been a patent practitioner for over a dozen years, and his experience spans several areas of patent law, including prosecution, litigation, post-grant proceedings, licensing, and opinions. He has drafted and/or prosecuted over two hundred patent applications in various technical fields, generally relating to electrical engineering and computers. Mr. Jairam has worked on numerous patent infringement cases and has more recently been among the most active practitioners in inter partes review (IPR) proceedings before the Patent Trial and Appeal Board (PTAB) of the USPTO. For example, in 2018, he filed more IPR petitions than any other associate in the United States, according to Docket Navigator. He also handles IPRs on behalf of patent owners and leverages his experience in patent prosecution. He has been recognized as a "Legal Lion" by Law 360 for his IPR work.

Mr. Jairam has had a proven track record of diligent efforts and successful results throughout his life. For example, after graduating first in his high school class at the age of 16, Mr. Jairam earned undergraduate degrees in mathematical sciences, computer science, and electrical and computer engineering, with University Honors, and a master's degree in electrical and computer engineering, all from Carnegie Mellon University. After university, Mr. Jairam worked at MIT Lincoln Laboratory for about seven years on research and development projects generally involving signal processing and communications. His work covered image processing, radar signal processing, audio signal processing (e.g., for speech/speaker/language recognition), and natural language processing. As a result, he has a sound understanding of various technical issues that arise in patent matters.

In addition to his primary practice in patent law, Mr. Jairam has served as local counsel in the "Rocket Docket" Eastern District of Virginia and the Fourth Circuit Court of Appeals for various types of matters, including commercial litigation, defamation, and class action securities litigation. He also maintains an active pro bono practice, primarily in veterans law and patent law.