The project is the first 4G toll-road project in Colombia developed as an iniciativa privada, a concession proposal unsolicited by the Colombian government. The $488 million financing package was priced in Colombian pesos and consists of a series of 26-year UVR-denominated notes and three credit facilities. 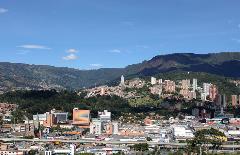 The Ruta al Mar highway project will interconnect the northwestern region of the country, beginning in Antioquia.