The Future of Italian Mutual Banks

On March 24, 2015, the Italian Parliament converted into law an emergency decree

[1]
(the “Reform”) aimed at dramatically altering the legal framework applicable to Italian mutual banks or “banche popolari” (the “Mutual Banks”).

First and foremost, the Reform intends to force the biggest Mutual Banks with total assets exceeding €8 billion (on a sole or consolidated basis) to transform themselves into S.p.A.-type companies, i.e. joint stock corporations.

Secondly, the Reform amends significant aspects of the legal regime applicable to all Mutual Banks.

The Reform has been welcomed by regulators and commentators as an effective means to improve Mutual Banks’ corporate governance, encourage consolidation in the European banking sector, foster domestic as well as foreign investments, and eventually increase the competitiveness of the Italian banking system.

The Mutual Bank legal framework applies to a significant number of Italian banks, including listed companies and “significant supervised entities” subject to the direct supervision of the European Central Bank (the “ECB”) within the Single Supervisory Mechanism (a list of Italian Mutual Banks is attached herewith as Annex 1).

The Mutual Bank legal framework includes a set of specific rules that often proved an obstacle to investors, such as:

Following the enactment of the Reform, a Mutual Bank’s assets cannot exceed €8 billion (the “Threshold”), on a stand-alone or a consolidated basis.

[4]
Within a year from the date the Threshold is exceeded (the “Window-Period”), a Mutual Bank has to:
[5]

The Bank of Italy is expected to set out a thorough regulation of this matter in the next few weeks (the “Bank of Italy Regulation”).

[6]
and simplified the authorization process.
[7]
Moreover, the Reform envisages an interim-regime, which provides:

The Reform innovates Mutual Banks’ legal regime in several areas, without repelling its cornerstones (e.g., the “one head-one vote principle” and the shareholding cap). Among others, we highlight the following innovations:

Mutual Banks have traditionally represented an important portion of the Italian banking business, with strong ties to local businesses. Their transformation into more “ordinary banks” will, on the one hand, attract the interest of foreign investors, which had traditionally no interest in them because of their peculiar features, and on the other hand, push them to seriously consider mergers as an option to strengthen their capital, improve their market position and competitiveness and be able to properly address the large volumes of new banking regulations.

In the meantime, with their transformation into joint stock corporations the biggest Mutual Banks will also probably experience a shift in the current power dynamics in the coming months and changes to their internal corporate governance.

The Reform is, therefore, expected to provide new investment opportunities for strategic investors, lenders, and equity and bond traders, increasing, at the same time, the efficiency of the Italian banking system. 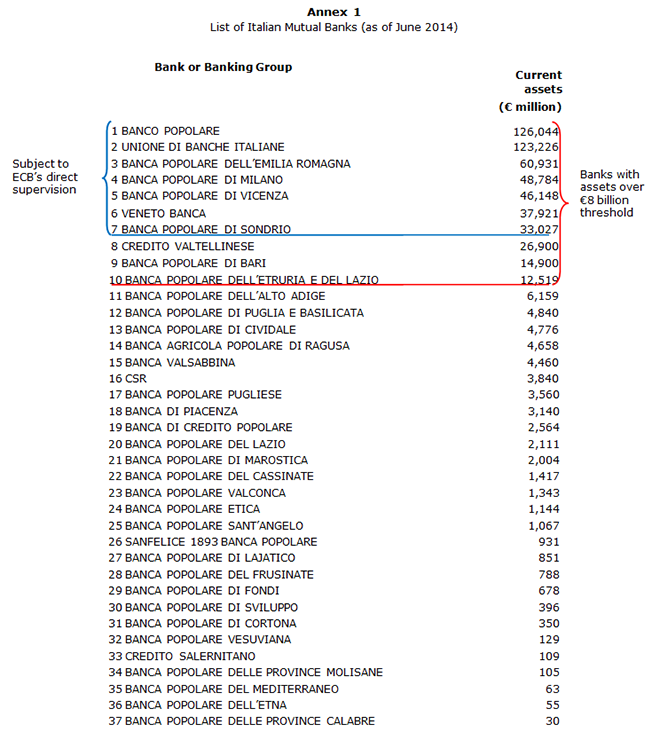 Paul Hastings LLP
StayCurrent is published solely for the interests of friends and clients of Paul Hastings LLP and should in no way be relied upon or construed as legal advice. The views expressed in this publication reflect those of the authors and not necessarily the views of Paul Hastings. For specific information on recent developments or particular factual situations, the opinion of legal counsel should be sought. These materials may be considered ATTORNEY ADVERTISING in some jurisdictions. Paul Hastings is a limited liability partnership. Copyright © 2015 Paul Hastings LLP.

Click here for a PDF of the full text