Palo Alto and San Diego – The Daily Journal has named 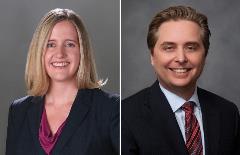 Chaikovsky was named to the Daily Journal’s Top Intellectual Property Lawyers list for the seventh consecutive year, with the publication noting his work on behalf of Trend Micro, Snap, HTC, H.I.G Capital, Xtera, Twitter, and Canon. The Daily Journal highlighted Chaikovsky’s success on behalf of Snap, successfully invalidating four of six patents asserted by BlackBerry, crippling the plaintiff’s case. BlackBerry was forced to dismiss the case and appeal the summary judgment rulings.

Brann, who chairs Paul Hastings’ San Diego litigation department, was profiled for success on behalf of Align Technology, landing a favorable settlement that concluded 14 years of patent litigation against its bitter rival, ClearCorrect. The settlement came on the eve of a trial after a summary judgment ruling in favor of Align Technology, and ended the litigation with ClearCorrect paying $51 million in damages to Align. As a result of the settlement, Brann was named “Litigator of the Week” by American Lawyer and recognized by Law360 as a “Legal Lion.”

At Paul Hastings, our purpose is clear — to help our clients and people navigate new paths to growth. With a strong presence throughout Asia, Europe, Latin America, and the U.S., Paul Hastings is recognized as one of the world’s most innovative global law firms.