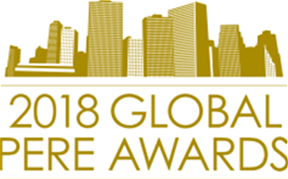 London – Paul Hastings LLP, a leading global law firm, is proud to have been named “Law Firm of the Year: Transactions” by PERE (Private Equity Real Estate) magazine in the annual PERE Europe Awards for 2018.

The citation states that the firm regained the top spot in this category by ‘dethroning’ a UK Magic Circle firm, following a win in 2016 and coming runner-up last year. It goes on to state that ‘the law firm surged to the front of the pack after advising hospitality giant Starwood Capital on a pair of major transactions’ – the £1.1bn sale of a portfolio of 14 Principal and De Vere-branded UK hotels (also named “Deal of the Year” for Europe), and the acquisition of a 30 per cent stake in Yotel, an affordable hotel operator, for $200 million.

Michael James
was lauded for his involvement in many of the firm’s award-winning transactions with his team, and the firm’s role in other deals throughout Western Europe was also noted.