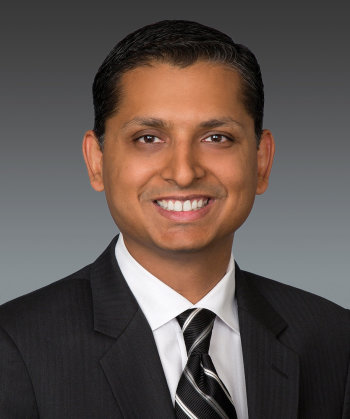 Mr. Modi’s practice covers all aspects of high stakes IP-related legal work, including litigation before federal district courts, the U.S. International Trade Commission, and federal appeals courts; post-grant proceedings, interferences and derivation proceedings before the Patent Trial and Appeal Board (PTAB); arbitrations; and due diligence and client counseling. He has led "bet-the-company cases" involving patents, trademarks, trade secrets, and copyright issues. He has represented both companies accused of infringement and those whose IP has been infringed in a wide range of technical areas, including electronics, software, business methods, medical devices, chemicals, pharmaceuticals, and biotechnology.

Mr. Modi has lectured nationally and internationally on IP law, including in Africa, India, Korea, Japan, Saudi Arabia, Sri Lanka, Taiwan, and Thailand. He helped develop and has been teaching a course on Federal Circuit Practice at the George Mason University School of Law for over a decade. Prior to joining Paul Hastings, Mr. Modi was a partner in the Intellectual Property group of an international law firm. He clerked for the Honorable Alvin Anthony Schall at U.S. Court of Appeals for the Federal Circuit. In law school, he served as a Writing Fellow and member of the George Mason Law Review. Before pursuing a legal career, Mr. Modi was an engineer with Lockheed Martin Federal Systems, Raytheon Systems Company, and Hughes Aircraft. Mr. Modi graduated from George Mason University School of Law, magna cum laude, and also holds a B.S. in electrical engineering from George Mason University, with high distinction.

Mr. Modi devotes a portion of his time to serving the legal community, the bar, and the public on pro bono matters. He currently serves on the Federal Circuit’s Advisory Council and GW’s IP Advisory Council (IPAC). He served as the Past‑President for the PTAB Bar Association, an association he helped form. He represents individuals in immigration matters, including current representation of a priest of a local temple in his naturalization proceeding, and past representation of a Nepali-based family in their request for asylum before the Immigration Court.

Mr. Modi has been widely recognized over the years for his significant and deep experience in IP law. IAM Patent 1000 has recognized Mr. Modi as “a top strategist, extremely articulate presenter and all-round thought leader.” It has noted that “[h]e’s just incredibly high quality – a hard worker with a wonderful temperament’” and that “[p]eople think the world of the ‘calm and collected’ Modi, ‘an incredibly thoughtful guy who presents great strategic options tailored to the business goals of his clients.’” Chambers USA has ranked him in Band 1, noting that “[h]e is very strategic and does an excellent job of mapping out a strategy that fully integrates substantive arguments with procedural nuances,” that “[h]e explains complex issues very well, and is very responsive to questions and requests,” and that “[h]e is an amazing litigator who presents very well.”

Mr. Modi has been especially recognized for his appellate experience. He has led over 100 appeals at the U.S. Court of Appeals for the Federal Circuit and has been involved in all aspects of the appellate process, including briefing and oral argument. Law360 recognized him as an Intellectual Property MVP in 2019 for racking up nine wins at the Federal Circuit, having successfully represented clients such as Google and Samsung. The Legal 500 also has recognized Mr. Modi as a “key lawyer” for appeals.

In addition, Mr. Modi is one of the foremost experts in challenging and defending patents before the United States Patent and Trademark Office under the America Invents Act, including its PTAB. He helped build and lead the firm’s Patent Office practice. He has been involved in well over 500 post-grant proceedings, including inter partes review (IPR), post-grant review (PGR), covered business method (CBM) review, and ex parte and inter partes reexamination proceedings. He has been nationally recognized for his expertise in post-grant proceedings, including for having been involved in more PTAB proceedings than any other practitioner in the United States: