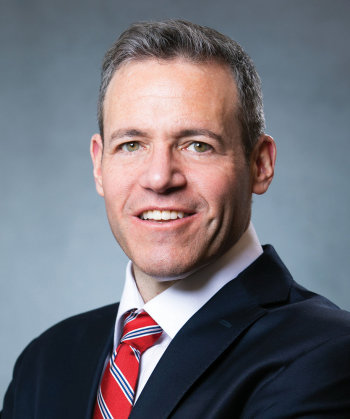 Bruce Wexler is the Global Co-Chair of the Intellectual Property practice at Paul Hastings, overseeing the firm's 100-plus lawyer IP practice. Mr. Wexler is a trial lawyer with extensive experience litigating high-stakes patent cases in a range of technologies. He has represented clients as lead counsel defending their patents covering multi-million and multi-billion dollar drug products.

He forms close partnerships with his clients to achieve successful outcomes, including in bet-the-company cases. In Hatch-Waxman Act matters, he has litigated against virtually every generic drug company. He has helped his clients with important drug products such as Aricept®, Pradaxa®, Mirapex®, Cyltezo®, Basaglar®, Entereg®, Emend® oral and Emend® for Injection, Aciphex®, Banzel®, Gocovri®, and Opsumit®.

Mr. Wexler is also an Adjunct Professor of Law at New York University School of Law, where he teaches an advanced course in "Life Sciences Patent Law."

Mr. Wexler represented Orexigen in a complete trial victory in a patent litigation relating to Orexigen’s weight loss drug Contrave® against Actavis Laboratories (now part of Teva Pharmaceuticals). At trial, Mr. Wexler successfully cross-examined the generic’s surprise fact witness who claimed to be a prior inventor and the generic’s lead expert witness after the generic sought to alter strategy the night before his testimony. The Federal Circuit affirmed the trial victory on the longest running patent, citing, among other things, Mr. Wexler’s cross-examination at trial.

Mr. Wexler was lead counsel for Eisai and Arena in numerous generic challenges to Belviq® (lorcaserin), an innovative treatment for weight loss. After litigation into expert discovery and successful cross-examination of the generics’ experts, the case settled including stipulations of infringement.

Mr. Wexler was lead counsel for Merck in patent infringement litigation defending Merck’s patent protecting the active ingredient in Emend® for Injection, an important drug for the prevention of chemotherapy-induced nausea and vomiting. After a six-day bench trial, Judge Sheridan of the District of New Jersey entered judgment in favor of Merck on all aspects of Sandoz’s invalidity defenses, resulting in a complete victory for Merck. In the course of the Court’s 80-page opinion finding in Merck’s favor, the Court noted the lack of credibility of Sandoz’s key expert witness who had been cross-examined by Mr. Wexler at trial.

Mr. Wexler was lead counsel for Eli Lilly & Co. in litigation with Sanofi regarding Eli Lilly’s request to market its insulin glargine drug product Basaglar®. Sanofi brought suit on five patents, relating to a pharmaceutical composition and injector pen device, listed in the FDA Orange Book for Sanofi’s Lantus® and Lantus SoloStar® insulin glargine products. Mr. Wexler successfully led the case through fact and expert discovery, including live-witness Markman proceedings. The case settled on the eve of trial in late 2015 with the press reporting Eli Lilly’s ability to launch Basaglar® the following year.

Mr. Wexler was lead counsel for Eisai in litigation with five generic defendant groups involving the patents directed to a crystalline form of rufinamide, the active ingredient in Eisai’s drug product, Banzel®, an important drug in the treatment of epilepsy. After successfully litigating through fact and expert discovery, Mr. Wexler obtained a victory in Markman proceedings having significant implications for the infringement and validity issues in the case. Mr. Wexler also convinced the Court, during the final pretrial conference, to exclude certain purported testing evidence by the defendants offered in support of their invalidity defense. An hour before opening argument at trial, the case settled on favorable terms.

While district court litigation was ongoing with other generic drug companies, generic drug company Apotex filed a petition for Inter Partes Review (IPR) at the U.S. Patent and Trademark Office seeking to invalidate the patent protecting Merck’s Emend® for Injection drug product. Mr. Wexler obtained a successful ruling from the PTO rejecting Apotex’s invalidity attack and refusing to institute review, and this ruling was subsequently reaffirmed on Apotex’s petition for rehearing.

Mr. Wexler was lead counsel for Boehringer Ingelheim in this appeal involving the patent protecting Mirapex®, a key drug in the treatment of Parkinson’s disease. Mr. Wexler was hired to handle the appeal after another firm had received an adverse ruling at trial. Mr Wexler argued and won a complete reversal from the Federal Circuit, with the Court declaring the patent to be valid. The appeal established important precedent concerning the scope of the double patenting safe harbor provision, 35 U.S.C. 121.

Mr. Wexler was lead trial counsel for Eisai in an action defending Eisai’s patent protecting Aricept®, the market leading drug for the treatment of Alzheimer’s disease, having sales of some $2 billion/year. Mr. Wexler obtained a preliminary injunction against Teva’s threatened launch of a generic version of the drug. Mr. Wexler ensured continued exclusivity of the patent through patent expiration, and successfully defended attempts by Teva to trigger and run out the regulatory exclusivity of a first-filing generic drug applicant.

Mr. Wexler was co-lead trial counsel to Eisai in litigation defending Eisai’s patent covering Aciphex®, an acid reflux drug with annual US sales in excess of $1 billion. Eisai initially won summary judgment of patent validity, followed by a successful trial win on the a defense of inequitable conduct. The judgments were then affirmed on appeal. The case established helpful precedent for innovator pharmaceutical companies with respect to the standards for judging obviousness of a compound patent.

Mr. Wexler represented Wyeth (acquired by Pfizer) and Altana Pharma AG (acquired by Nycomed) in a jury trial against three generic pharmaceutical companies regarding the companies’ $2 billion per year ulcer drug Protonix®. Mr. Wexler successfully examined the inventor of omeprazole, who was also serving as an expert. The jury upheld the validity of the patent, permitting the plaintiffs to seek a damages claim of billions of dollars.

Mr. Wexler represented Pfizer (Warner-Lambert Company) during a successful bench trial against Teva involving Pfizer’s formulation patent covering its highly successful cardiovascular drug Accupril®. Mr. Wexler elicited critical trial testimony from Pfizer’s formulation expert, including refutation of new evidence presented for the first time by the generic’s expert at trial. In its decision, the Court found the patent was not invalid for lack of enablement, despite the breadth of the claims.