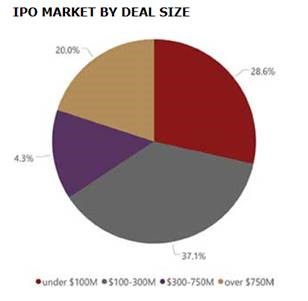 New York – A new report on the U.S. IPO market from Paul Hastings LLP, a leading global law firm, shows that despite a number of high-profile public offerings in the first half of 2019, the trend continues to be toward smaller IPOs – those under $300 million – making up 66 percent of all initial public offerings from January through June, with strong IPO pricing and continued use of corporate governance “entrenchment mechanisms” in the first half of the year, each according to Going Public: The U.S. IPO Report.

In Going Public, Paul Hastings conducted a comprehensive review of U.S. IPOs from the first half of 2019, and found that amidst movement by companies to robust private capital markets, evidenced by the high incidence of private placements occurring prior to IPO, IPOs were appropriately marketed at the time of IPO. In fact, over 75 percent of issuers priced at or above the midpoint of the pricing range set before their roadshow. For IPOs $100 million or more, over 85 percent priced at the midpoint or higher.

“The developments that we saw in the first half of the year – in particular, the continued streamlined SEC process, use of JOBS Act accommodations and intersection with the private markets –  may be a positive sign for the longer term accessibility of the public market, since being ready to hit the market is critical to execution, especially in light of today’s complex, dynamic marketplace,” said

Frank Lopez
, co-chair of the Securities and Capital Markets Group at Paul Hastings. “Executing a successful IPO takes strategic thinking, nimbleness and smart timing, as well as a sound understanding of what is working and why.”

Other noteworthy trends and activity among first half 2019 IPOs, include: