By THE SECURITIES AND CAPITAL MARKETS PRACTICE

Welcome to the inaugural edition of IPOs in the JOBS Act Era 2014, published by Paul Hastings. The implementation of the JOBS Act has significantly simplified the initial public offering (IPO) process for many companies. In the two years since the JOBS Act was signed into law, the annual number of U.S. IPOs has reached its highest level since 2007. Although market factors played a role, it is clear that the accommodations offered to IPO issuers under the JOBS Act have been critical factors in many companies’ decision to “go public.” Many of the JOBS Act provisions are already firmly embedded in the U.S. IPO landscape.

In our in-depth study, we examine the corporate governance practices and disclosures of 100 U.S.-based Emerging Growth Companies that completed an IPO during the period from September 2012 (five months after the adoption of the JOBS Act) to August 2014. Of the surveyed issuers, 48 are in the technology sector and the remaining 52 are in the life sciences sector. 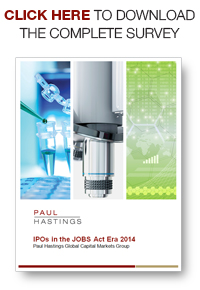