Policy Statement
“) enabling consumers to post on the CFPB’s web-based public consumer complaint database (the “Database”) complaints about consumer financial services in narrative format.
[1]
While the CFPB has maintained the Database since 2012, under the Policy Statement, consumers would be able to submit detailed descriptions of their experiences in dealing with providers of consumer financial products and services. Once a complaining consumer consents to publication, the CFPB would remove personally identifying information and then feature the consumer’s full complaint in narrative form on the Database. By making these firsthand accounts of consumer experiences publicly available, the CFPB seeks to enable consumers to “make informed decisions” and identify “trends in the consumer financial market.”
[2]
However, the Bureau’s minimal procedures for verifying the accuracy of information alleged in such complaints, the limited opportunity afforded to providers to respond, and the failure to ensure that published information and data is statistically representative of the consumer experience may compromise the Bureau’s efforts with respect to these goals.

The Policy Statement explains that, while the Bureau does not “verify the accuracy of all facts alleged in complaints,” each narrative complaint would be screened prior to posting on the Database. Specifically, the CFPB will verify: (1) that a commercial relationship exists between the consumer and the provider, and (2) that the complaint was submitted by the consumer or the consumer’s authorized representative. Aside from these minimal verification procedures, however, the CFPB will apparently not review the substance of the narratives submitted. In addition, the CFPB evidently will not establish an agency procedure to remove complaints from the Database if the named provider resolves the issue described, regardless of the promptness of any such resolution.

While consumers are being empowered to submit narratives detailing experiences with providers of financial services, numerous constraints will limit the ability of providers to respond meaningfully to public complaints on the Database. Under the Policy Statement, a provider that is identified in a public complaint will be given the option to select a “structured response” from a “finite list” of possible public responses.

[3]
The CFPB has not yet provided the content of these public “structured response options,” but has clarified that providers will not be prevented from providing a more detailed private response to a complaining consumer.
[4]

While the scope and format of the public-facing structured response option remains unclear, providers should carefully consider the potential repercussions of any such response. At a minimum, a provider’s admission of fault or error could have consequences that carry far beyond the complaint at issue, including the possibility of being used against a provider in litigation brought by the Bureau, a private party, or even in a class action. Although the Bureau has indicated that it will remove all personally identifiable information from consumer complaints, it is unclear how this process will work and how the agency will handle and review 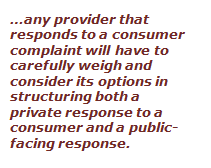 provider public-facing responses, particularly if the options do not provide an adequate opportunity to respond to a particular situation or set of circumstances.

Certainly, any provider that responds to a consumer complaint will have to carefully weigh and consider its options in structuring both a private response to a consumer and a public-facing response. As a result of the various limitations on a provider’s ability to publicly respond to consumer complaints, it is unclear whether and how the expansion of the Database will be able to facilitate a productive and open dialogue between consumers and providers. Further, it is also unclear whether information contained in the Database will provide the public useful insights into consumers’ experiences with financial products and services.

Potential Issues with the Database

While the CFPB intends for the expanded Database to assist consumers in gaining information to make well-informed financial decisions, achieving the Bureau’s stated goal of providing a source of data helpful to consumers may be elusive. Crucially, the Bureau will apparently not include any statistical reference points for the complaints submitted; as such, a consumer seeking to learn about a particular product or service 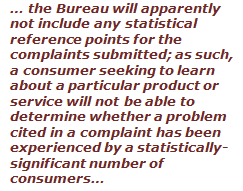 will not be able to determine whether a problem cited in a complaint has been experienced by a statistically-significant number of consumers or whether it was an isolated event. While one problem cited in a public complaint may be unique to a single consumer, another complaint may affect a significant percentage of consumers. It appears that a consumer engaging in financial decision-making based on the Database may not have a mechanism—at least one provided by the CFPB—to ascertain the level of consumer satisfaction with a given product or provider, or the prevalence of complaints relative to the consumer population as a whole dealing with a certain product or provider.

Understanding the importance of transparency and data integrity in the consumer financial services context, the public release of consumer complaints without any data reference points appears to be a notable weakness, particularly for a data-driven organization such as the CFPB. Generally, while particular complaint data may be meaningful to consumers, it remains largely anecdotal due to the lack of context; and the potential volume of such information may be overwhelming. It is not a statistically-sound and effective method to provide consumer complaint information to consumers without also providing them the ability to analyze the accuracy and relevance of the information with respect to a particular product and/or provider. While a number of consumer complaint websites attempt to establish a system or process for assessing the relevancy of consumer complaints through a rating system or scale, the CFPB’s Database could ultimately establish a process that treats every single public complaint as an event requiring a provider’s public response regardless of the merits of the compliant. In the Bureau’s zeal to protect consumers, it is possible that the Database could be providing a large volume of ineffective and misleading information that, in the process, makes consumers less well-informed due to the lack of context in which such information is presented.

The CFPB itself previously noted, in its proposed rule to regulate prepaid products, that too much information may be detrimental to consumers’ understanding of financial products.

[5]
A lot of information with insufficient context is arguably more detrimental. Rather than throwing volumes of uncertain and unsubstantiated consumer complaints into the public domain, it would likely be more effective and provide better information to consumers for the agency to aggregate and publish complaint information on a particular financial product/service or provider. Alternatively, it may be effective for the CFPB to consider a system to post complaints to the Database where the complaint has not been satisfactorily resolved within a stated period of time, thereby highlighting products and/or providers in which there are unresolved issues.

It appears these modifications to the CFPB’s policy could, perhaps, more effectively and efficiently promote the goals of transparency and consumer information/education

cited in the Policy Statement by facilitating the dissemination of useful and representative data to consumers making financial decisions. Conversely, without the ability to access statistical data or context for submitted complaints, many consumers may be unable to identify any meaningful “trends in the consumer financial market” when reviewing the complaint narratives on the Database.

[6]
In the absence of any significant reforms, the Database could end up increasing the risk of reputational harm to providers of financial products and services while providing information of doubtful utility to the consumers the Bureau seeks to protect.

Given that the CFPB may begin publishing complaints in narrative form on the Database as early as June 22, 2015, entities subject to the CFPB’s jurisdiction and enforcement authority should consider developing an action plan to address issues arising with the CFPB’s expanded complaint Database.

[7]
The plan should include the following action items:

Paul Hastings attorneys are actively working with clients to analyze issues with, and develop policies and procedures to address, the CFPB’s expanded consumer complaint review process and Database and its implications for providers.

[1]
Consumer Financial Protection Bureau, Final Policy Statement: Disclosure of Consumer Complaint Narrative Data 80 Fed. Reg. 15572 (Mar. 24, 2015), available at
http://files.consumerfinance.gov/f/201503_cfpb_disclosure-of-consumer-complaint-narrative-data.pdf
.
[2]
Press Release, Consumer Financial Protection Bureau, CFPB Finalizes Policy to Give Consumers the Opportunity to Voice Publicly Complaints About Financial Companies (Mar. 19, 2015), available at
http://www.consumerfinance.gov/newsroom/cfpb-finalizes-policy-to-give-consumers-the-opportunity-to-voice-publicly-complaints-about-financial-companies
(“CFPB Press Release”).
[3]
80 Fed. Reg. at 15578.
[4]
Id.
[5]
Consumer Financial Protection Bureau, Notice of Proposed Rule Prepaid Accounts Under the Electronic Fund Transfer Act (Regulation E) and the Truth in Lending Act (Regulation Z), 79 Fed. Reg. at 77263, n. 436 (Dec. 23, 2014), available at
http://files.consumerfinance.gov/f/201411_cfpb_regulations_prepaid-nprm.pdf
(stating “[t]he idea that consumers may decrease their engagement with information when more information is provided is somewhat supported by research on ‘choice overload.’ This work demonstrates that when choice sets are large, some people opt to make no choice at all”).
[6]
See CFPB Press Release.
[7]
The Policy Statement indicates “the Bureau will not publish any consented-to narrative for at least 90 days after the policy’s publication in the Federal Register.” 80 Fed. Reg. at 15572.
Click here for a PDF of the full text